Most people have heard of polio but few know that the disease still affects children around the world. You can help by spreading the word.  Every donation helps us obtain the vaccines, transport and materials needed in the fight against polio.

Poliomyelitis is a highly infectious disease that most commonly affects children under the age of 5.  Most know it as the polio virus. The virus is spread person to person, typically through contaminated water. It can attack the nervous system, and in some instances, lead to paralysis. Although there is no cure, there is a safe and effective vaccine – one which Rotary and our partners use to immunize over 2.5 billion children worldwide.

Rotary has been working to eradicate polio for more than 30 years. Our goal of ridding the world of this disease is closer than ever.   As a founding partner of the Global Polio Eradication Initiative, we've reduced polio cases by 99.9 percent since our first project to vaccinate children in the Philippines in 1979.  We've helped immunize more than 2.5 billion children in 122 countries. So far, Rotary has contributed more than $1.8 billion toward eradicating the disease worldwide.  Today, polio remains endemic only in Afghanistan, Nigeria, and Pakistan. But it’s crucial to continue working to keep other countries polio-free. If all eradication efforts stopped today, within 10 years, polio could paralyze as many as 200,000 children each year. 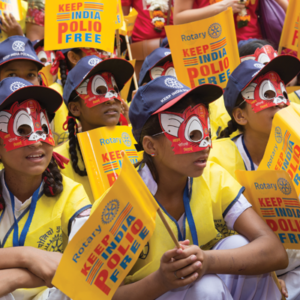 This has been a monumental undertaking; a successful undertaking.
One. Club. At. A. Time.

Chatham Rotary Club, through it's fundraisers and donations, is proud to have been and will continue to be, a supporter of this world-wide mission. The work is not complete.  Due to migrating populations and other factors, polio can still rear it's ugly head.  So, as a club, we will ardently support this important cause as Rotary International and it's partners continue to monitor the world for this dreaded disease.